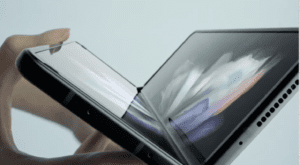 For Samsung, summer has traditionally been synonymous with the Galaxy Note, but in 2019 the top-of-the-line model had to share the limelight with the Galaxy Z Fold line. Then, in 2020 the Note even had to share the stage with the Fold family. If you follow the smartphone market, you can understand why the absence of the Note in this year’s lineup makes sense. Yet, the strong loyalty to the family led TM Roh, Samsung Mobile President, to pen a blog last month saying that this year Unpacked will be all about foldables and the role they can play in the future of smartphones. While Roh did not right out, say there will be no more Note models, the addition of pen support to the Galaxy Z Fold chips away at the need for a Note line. Yes, the Galaxy S Pen is not stored within the Fold device, but I reckon we are a year away from seeing that level of integration.

For now, if you are interested in using the Galaxy S Pen Fold edition, you can either store it in a case or use a Galaxy S Pen you use on your Galaxy Book, where the tip has been redesigned to avoid excessive pressure on the Fold’s display. The addition of pen support really opens new use cases for the Galaxy Z Fold, both from a creativity and productivity perspective.  I can already foresee some attempts to use the Galaxy S Pen to damage the Galaxy Fold. Yet, the addition underlines the continued work Samsung’s engineers have put in delivering a higher level of durability, whether by making it water-resistant or making the display more robust. Samsung sees foldables as the future of smartphones. If they are the future, they will always boast the latest and greatest technology, a bragging right that historically belonged to the Galaxy Note.

When you consider this dynamic, it is clear that the Note no longer has a role to play in the portfolio, but the qualities that defined it will be found in the Galaxy Z family. From an audience perspective, The Galaxy Z Fold offers Samsung a broader opportunity than the Note, as it appeals to users who love the Note for its pen support as well as buyers who are into cutting edge tech and buyers who want to stand out from the crowd with a different look.

Durability was not the only focus of this generation of products. Increased flexibility in how these foldable devices can be used was clearly top of mind. Samsung’s design remained consistent over the three iterations, both on the Galaxy Z Fold and the Z Flip. While some might find this boring, it shows that Samsung landed on the right design from the start (except for the screen protector) and what we see are minor tweaks made to a winning formula. The external display is probably what we have seen evolve the most over time, both for the Galaxy Z Flip and the Fold. At the core of the different designs is the need to strike the right balance between making the outside display useful enough without preventing people from experimenting with the foldable display. The front camera is another area that has evolved from a somewhat awkward forehead to an elegant notch to this year’s under-display camera.

The journey here is not necessarily about the best camera per se but the relationship between the best camera and the most immersive viewing experience. So far, under-display cameras have been criticized for delivering lower-quality pictures than traditional cameras. Choosing to use one in the new Fold 3 has much more to do with providing an undisturbed viewing experience than it does making a “technology first” statement. The lack of the notch opens up the Fold’s display to its full 7.6-inch glory both for entertainment and productivity needs.

All the enhancements displayed in the Galaxy Z Fold and Flip are exciting and certainly move the category forward. Yet, there are two aspects of these new models that increase the appeal to a broader audience: price and app ecosystem.

During the event, Samsung showed a slide full of logos representing different optimized apps for the Galaxy Z Fold, including Spotify, YouTube and TikTok. Of course, having a larger screen real estate is excellent for video. Still, apps can use the extra screen more intelligently, either by how information is presented or by flattening part of the UI to lower friction.

As is the case in the overall smartphone market, the foldable market is not homogeneous. I explained in the past, I see the Galaxy Z Fold and the Galaxy Z Flip appeal to two very separate segments focused on productivity on one side and detoxing on the other. The Fold, with the support for Microsoft apps, clearly bridges smartphone and tablet while the Flip bridges smartphone and wearable. A user can now launch Samsung Pay, access quick settings, read notifications and use widgets for music, weather, schedules, alarms, Samsung Health, Galaxy Buds controller, voice recorder and timer, all without ever opening the Z Flip 3.

Users preordering the Galaxy Z Fold or Z Flip will receive a year of protection from Samsung Care Plus, the premium support service that protects the phone from accidental damage and includes a one-time screen replacement. This is a nice touch to deliver extra peace of mind to buyers.

Affordability was the theme across the whole event, with the launch of the noise-canceling earbuds Galaxy Buds 2 at $149.99 and the Galaxy Watch 4 starting at $249. While it would be easy to put the more affordable pricing on the pandemic, we need to remember that the smartphone and accessory markets have been pretty healthy during the pandemic. Sales could have been even better had it not been for the component shortages that impacted the whole industry. At the end of the day, Samsung understands that multi-device ownership drives loyalty and engagement, the best deterrent to churn.