As is always the case with high-profile launches, we got to Apple’s California Streaming event with plenty of rumors to consider. Of course, most of what was expected did materialize on stage, but many of the details certainly helped paint a much better picture of Apple’s view of the market and how they plan to compete in it.

Here are some considerations worth highlighting.

The industry might be measuring every new product on how it compares to the previous generation. Still, the real opportunity is how the new products compare to products from two or three years ago. For example, looking at the current iPhone installed base, I would say 75 to 80 percent of the US iPhone users have a model older than the iPhone 12. Those are the users that need to look at the iPhone 13 and find enough reasons to upgrade. And those are the users who will also be able to take advantage of the particularly aggressive trade-ins offered by carriers, some accepting phones in any conditions.

The same reasoning applies to Apple Watch Series 7. The picture comparison below is possibly the best way to understand the impact that the updated screen on Series 7 will have on users of an Apple Watch Series 3, the model that has the largest user base to date. For Series 6 owners, faster charging, and the ability to get 8 hours of battery life in 8 minutes to track your sleep will have a great deal of appeal as early adopters also tend to use their Apple Watch more extensively, thus benefitting more from a longer battery or faster charging. 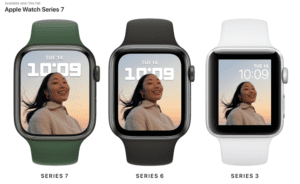 This leads me to my final point on the topic of upgrades which is that for many early adopters, the decision to upgrade is not necessarily driven by the features, but rather the desire to have the latest and greatest, even if that means incremental improvement. Early adopters also tend to have more disposable income allocated to tech and lean more heavily on programs such as the Annual iPhone Upgrade Program offered by Apple.

Apple has proven over time to be very intentional on how specific features trickle down in the price point and across products. This tactic allows Apple to test how sticky a feature is and then attract users to other products or make an upgrade more appealing. Two features stood out during this launch: Center Stage and Cinematic Mode.

First introduced to iPad Pro, Center Stage is the ability for the iPad camera to always keep the subject centered in the picture and adapt when more people enter the frame. The feature is supported whether you are doing a video call or shooting a video. Now, this feature has been added to both the new iPad and the iPad Mini. With video calls being part of everyday life and video becoming a form of expression embraced by so many, it makes sense for Apple to add Center Stage to these new iPads that include education and frontline workers as a target audience.

Cinematic Mode is a new feature added to the iPhone 13 line up that allows users to change the focus point after shooting the video and, maybe even more impressive, having the camera hold focus on a moving subject while allowing for focal transitions to happen automatically between objects as the subject looks away from the phone. The feature is driven by AI and powered by the new A15 Bionic chip. Apple could have chosen to release Cinematic Mode only to the Pro models but enabling it across the portfolio highlights the capability of the chipset as well as the single chip strategy across price points, which aligns with Apple’s selling point of delivering an uncompromised experience across the portfolio. For brands with a broader portfolio, we have seen chipsets being tactically used to limit cost at lower price points and being justified by the belief, not always correct, that users who pick a lower-priced device have a lesser need for performance.

Video is the New Battleground

I have already touched on the importance of video in the previous section. Apple wants to own mobile video in the same way as it has come to own mobile photography. This should not come as a surprise considering how historically Apple has always appealed to creators and how much video is now part of creators’ output. Everything from gaming to teaching to music and, of course, social relies on video. While the trend accelerated during COVID, there is no question that the importance of video as an art form and a means of communication is here to stay. What is fascinating is also that the appeal of video has no age limit. From teens on TikTok to grandparents on Facetime, video plays a significant role in what many of us do. The ability to deliver an experience that is intuitive, simple, and yet masterful is why features such as Cinematic Mode will appeal to a broad set of users.

During the latest quarterly earnings call, Apple CFO Luca Maestri said: “We expect supply constraints during the September quarter to be greater than what we experienced during the June quarter. The constraints will primarily impact iPhone and iPad.”

Yet, it is interesting that Apple chose to make all products available simultaneously rather than staggering them like last time. Of course, Apple can still prioritize models like the Pro, which tends to be the favored model by early adopters. Keeping an eye on pre-orders and delivery lead times might give us a better indication of how things are shaping up.

iPad Mini is an iPad Pro in Disguise

As the Android ecosystem is turning to foldables and consumers are increasingly dependent on technology and screens, I would argue the iPad Mini upgrade is particularly timely. With more video calls taken, more content consumed, more games played, and with the micro-mobility of the home in mind, the iPad Mini can play a much more significant role than in the past as a companion device to a computer a phone. The iPad Mini is now closer to an iPad Pro than a regular iPad. Still, Apple leaned into the tablet-first use case by adding support for Apple Pencil 2 rather than making it a mini version of the Pro by adding a Magic Keyboard to it.

Some argued that the iPad Mini should have been a phone given the added support for 5G, but the reality is that the form factor would not be as convenient for most users. Furthermore, in an enterprise context, a market that Apple highlighted on stage, not making the iPad Mini a phone has some advantages from who can procure them to how they are managed.

Part of me also wonders if this strong upgrade might be an indicator that, when the time is right, we might see the iPad Mini in a foldable design.