M2 Max: Under the Hood With the Latest Apple Silicon

Many years ago, I used to give a presentation to business school students specifically about the semiconductor industry. Part of that presentation focused on the wonder of semiconductors where we can marvel at the bigness and smallness of these magical pieces of science. Appreciating the bigness refers to how many billions of transistors can exist at a nanoscale on any object created by a human. The smallness relates to the fact that those billions of transistors can exist on something as small as a fingernail.

Apple didn’t start focusing on the specs of Apple Silicon when they first started launching A-Series processors. For a number of years now, Apple has not just been doubling down on the specs of Apple Silicon but also sharing the number of transistors on new Apple Silicon products. This trend began with the introduction of the A7 chip in the iPhone 5s where Apple announced they were moving to a 64-bit architecture and the new A7 had just over a billion transistors. Fast forward to the latest M2 processors where the M2 Max has 67 billion transistors. Now, while this is a big number, the number of transistors themself is not the whole story. The true genius of chip architects is how they spend that transistor budget. That is the area I want to focus on, as we seek to discern how Apple spends its transistor budget with Apple Silicon.

Apple’s chip design team, led by Johny Srouji, has consistently emphasized the Apple Silicon team’s ambition to double down on performance-per-watt. Their stated goal and their strategy with Apple Silicon are in plain sight. As reviewers get their hands on these new M2 Macbook Pros, there will be a lot of time spent benchmarking Apple’s performance vector but I want to focus on the per-watt vector.

For five days now, I’ve been using the new 16″ Macbook Pro with M2 Max. My prior Mac was the 16″ Macbook Pro with M1 Max. Battery life with M-series processors is already industry-leading but Apple has made a few changes architecturally to M2 Pro and Max with the addition of 2 more E (efficiency) cores compared to M1 Pro/Max. Apple stated the M2 Pro and Max have next-generation CPUs and GPUs over their predecessors and I was curious about what subtle changes to the CPU/GPU architecture were. Throughout these past five days, and using a tool to monitor M2 Max’s wattage use and frequency of the e-cores and p-cores, I believe Apple made two subtle changes. First, they made high-performance cores more efficient. When designing chips to be more efficient, and thus draw less power, one goal is to optimize to perform their workload and then get to a zero state as quickly as possible. While monitoring my Mac with M2 Max and my old Mac with M1 Max, I noticed the high-performance cores reach a zero state, and interestingly the M1 Max cores do not. Here is a side-by-side image of normal usage (web browsing, watching YouTube videos, working on editing a document, etc., on both Macs.

These subtle generational improvements in the M2 CPU design are the reasons I think Apple is able to tout around an hour of battery life increase over previous M1 Apple Silicon. While battery life is always difficult to truly test, my default is simply how many hours can I use my Mac during the day without plugging it in. Obviously, the amount of battery life largely depends on the tasks you do on a daily basis but with what I consider average workloads, this M2 Max got 12.5 hours of screen on usage.  That’s about two hours better of screen on usage than my M1 Max doing the same kinds of daily workloads.

While performance has definitely increased with this next generation M2 silicon in three vectors being efficiency cores, performance cores, and GPU cores, I feel it is not terribly helpful to focus so much on M2 over M1.  I find it extremely unlikely that owners of M1 Mac feel compelled to upgrade to M2 Macs. Which makes the target market the portion of the Mac installed base that is still on Intel Macs.

While it is difficult to estimate the exact percent of the base on Intel Macs, a study we did recently on the PC market in the US suggests ~41% of the US Mac installed base is still on Intel Macs. Given the US is Apple’s largest Mac market and other countries tend to upgrade devices more slowly, it’s safe to assume more than 50% of Apple’s worldwide Mac base is still on Intel-based Macs.

While current Geekbench multi-core tests conclude M2 Max multi-core CPU is ~20% faster than M1 Max the more eye-opening number is that M2 Max’s Geekbench multi-core CPU score is 123% faster than the last MacBook Pros to run Intel chips and 82% faster in single-core applications. With the lineup of Apple Silicon what it is, it’s even more enticing for the base of Macs still on the Intel platform to upgrade to Apple Silicon.

What makes analyzing how Apple spends its transistor budget intriguing is how Apple has the luxury to use that budget exclusively for its operating systems. In this case, the addition of two more efficiency cores and more GPU cores in M2 Max combined with next-generation CPU and GPU and new overall SoC design proves to be even more efficient and performant than previous generation Apple Silicon. It is the tight integration of silicon, hardware, software, and services, that allows Apple to optimize Apple Silicon specifically for Apple products. It is this union of Apple technology teams that leads to an experience that is differentiated and valued. Some may think consumers don’t care about Apple Silicon but that could not be further from the truth. In the same PC study I mentioned earlier, we looked at what factors drove Windows PC owners to switch to the Mac. Top of the list was Apple Silicon. Consumers, and enterprises, understand the effort Apple is putting into Apple Silicon and the overall impact it has on the Mac experience. Apple Silicon is not the only reason but is both a big and small reason Mac sales will continue to grow.

*All tests performed between 16″ Macbook Pro M2/M1 Max were on a full battery, on battery (unplugged), and the automatic setting that allows macOS to automatically choose the best level of performance and energy usage.

*I did not test M2 Pro but M2 Pro but given it has the next gen CPU and next-gen GPU many of the same performance-per-watt efficiencies will apply.

Below is a side-by-side view of a 4k video export. Several interesting observations can be made. 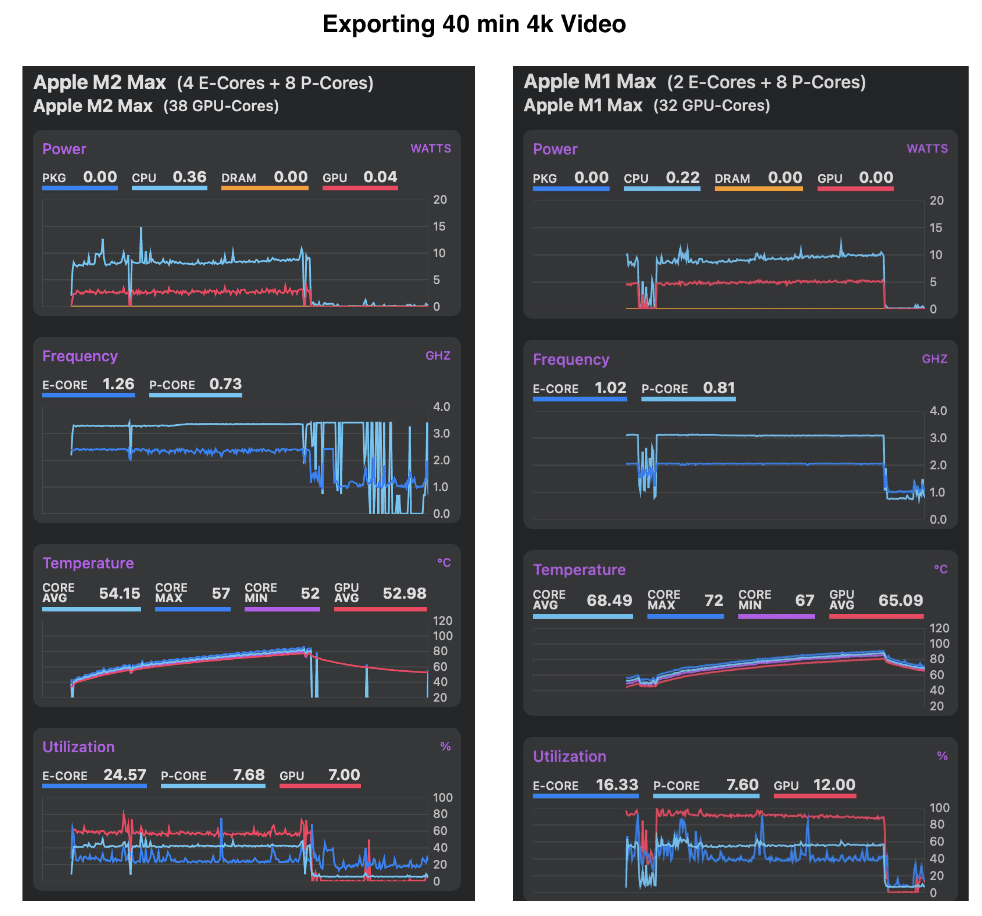