On Monday, Intel held an event to outline the next 5 years of their process technology roadmap. In addition, there were a number of technical announcements where they highlighted some of the benefits of their transistor design and packaging technology that will come to their latest chips over the next four years. Rather than get too technical, for now, I want to share a broader perspective around Intel as a company.

It is no secret Intel has had some major missteps this last decade. The main debate surrounding the company was whether these were just missteps or something else, something more concerning. What is the new normal for Intel? Is it getting back to the innovator and leader it once was, or will it never be the same company again? This theme was constant in my conversations with industry stakeholders as well as investors.

As I reflected on this, a sports analogy comes to mind. Intel is like a sports team superstar, who suffered a major injury, and is yet to play in its first regular-season game post-injury. When your star players suffer a serious injury, the question always lingers on if they can get back to peak performance as a player. Those questions will linger, pundits will speculate, fans will worry, all until the player gets back into real competition and answers the question.

In many ways, this is how I view Intel. They suffered an injury, and we all wonder if they can get back to their superstar self as a company. With Intel’s new leadership and now robust roadmap, everything looks good on paper, but until Intel starts consistently delivering on its roadmap and innovation, questions will still linger. Generally, it is not until your star player proves they are back to full strength that confidence in your team can rise.

Intel Passed the First Test
Intel passed the first test, in my opinion, Monday. This was a test for management to start highlighting Intel innovating, returning to leadership, resuming a posture of leadership, and presenting confidence in their abilities. It was refreshing to see Intel acting the way we expect Intel to act and exuding a posture of confidence in their ability to innovate in package and transistor design. The two things we have always historically counted on Intel to do.

Pat Gelsinger and Intel’s technology leaders shared a robust technology roadmap that–on paper–has them establishing competitive parity with their foundry competitors by 2024, with a small chance to regain process leadership in that 2024/2025 timeframe. 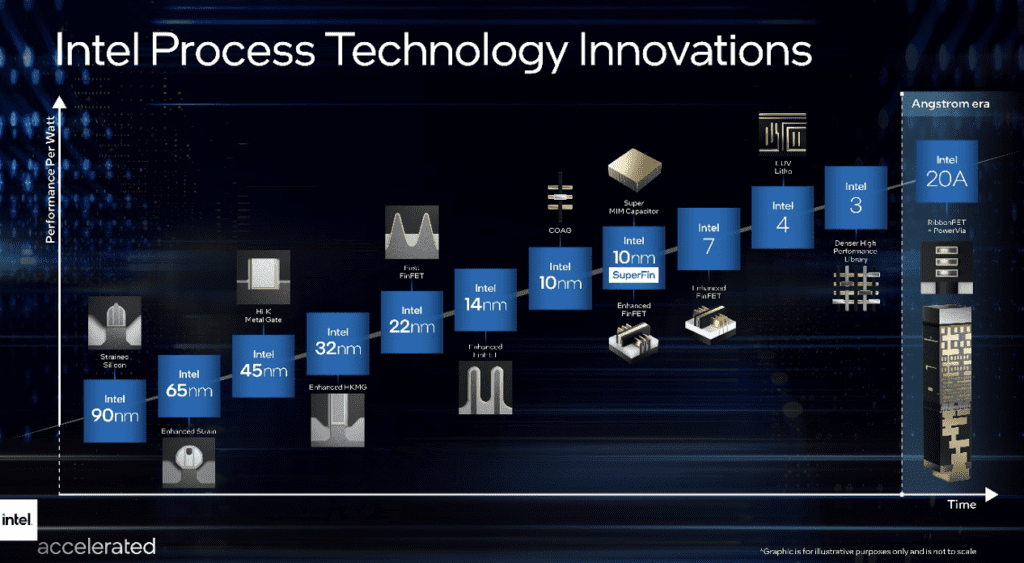 Intel publicly presented their technology roadmap, along with performance gain estimates for each new technology process and a timeline for several new processes and package technologies they are bringing to market. With this very public and detailed roadmap, the pressure is now on Intel to execute on the timeframe they presented.

This was a bold move, but Intel’s leaders made this move with extreme confidence they can deliver and execute on this product roadmap. I have a hard time believing such a detailed roadmap would have been presented if there was any doubt. This only adds to the pressure for Intel to deliver and execute, in my opinion.

We are about to see if Intel is back to their peak performing selves as they are up against major delivery milestones end of 2021 and throughout 2022. I believe if their timelines stay true and they deliver on Intel 7 and Intel 4, then confidence will rise that Intel is back.

Looking Farther Out than 2024
I do want to point something out regarding Intel and beyond 2024. Intel returning to form and getting to parity with the process and the product means they stay competitive in the markets they compete in today, which are largely data centers, notebooks, and desktops. So in my mind, Intel returning to form is not just about the competitive market today but also of tomorrow.

Yes, Intel needs to answer the questions about its ability to execute on current products, but what does Intel have up its sleeve for the next era of computing, which will include things like wearables (AR/VR, etc.), automotive, IoT, and many of the other areas where the next big semiconductor scale opportunities exist. Intel has to balance maintaining competition in current markets but also developing the roadmap for the next era of computing.

If Intel can execute on all these cylinders, it will certainly be a comeback story for the ages.