“What’s truly unique about Apple is that we don’t just start with a superfast chip and build features around it. Instead, we start with an idea about a great experience we’d like you to have, and then we all work together to bring it to life.”

This subtle point often gets overlooked amidst talk of Apple’s silicon performance. To a degree, Apple is to blame since they have frequently called out their silicon performance against competitors. And while performance is a relevant metric, especially over time, as I will explain, where most consumers will see the advances in Apple silicon is in the key features and experiences that silicon is designed to enable.

While it isn’t always obvious, Apple’s integrated product design approach of hardware, software, and silicon has led to many of the advances in camera, battery life, AI, video capture performance, and even ProMotion on iPhone 13 Pro. Apple has a luxury other silicon companies don’t. They custom-tune their architecture and silicon design specifically for iPhone and the feature they want iPhone to have. This allows them to spend their transistor budget on features instead of just pure performance.

While thinking about your phone’s performance, speed, etc., it is relevant people often get caught up in year-over-year performance since that is the way most in the silicon industry have been trained to think. As I mentioned, this is a relevant benchmark for a variety of reasons, but from the perspective of a normal consumer, looking at their experience upgrading every 3-4 years is a much more relevant analysis.

While I will admit there is a small percentage of Apple customers who upgrade every year and a percentage more who upgrade every two years because they are on upgrade plans, the vast majority of consumers upgrade every 3-4 years. I thought it would be interesting to look at some basic iPhone benchmarks through the years and look at how much performance improvement happens every four years. 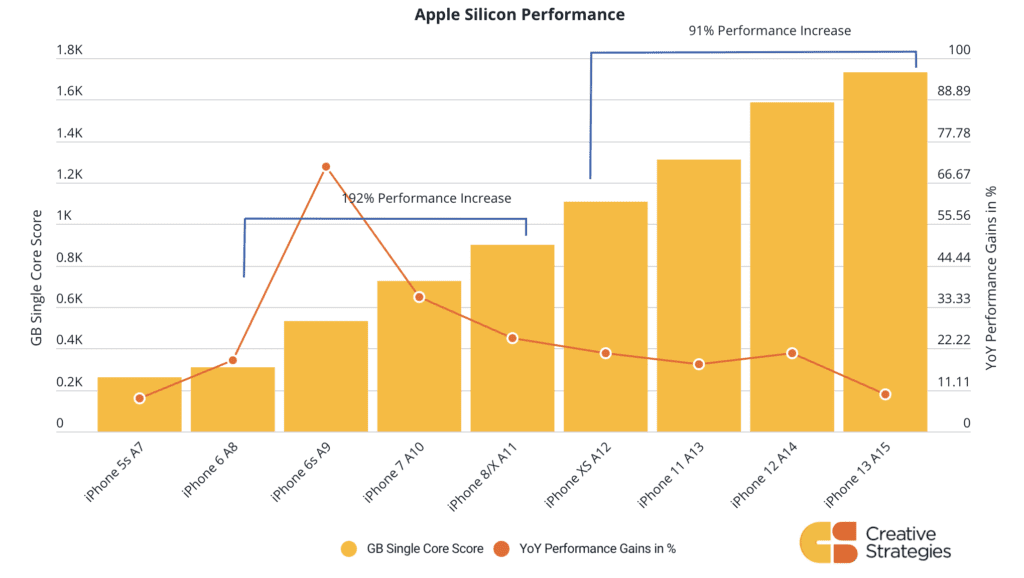 Going back to iPhone 5s, Apple has averaged 133% performance increases every four years. Most interesting, for this iPhone 13 cycle, are those Apple customers coming from an iPhone X or Xs are going to see a 91% performance increase. Our continued research in the smartphone category consistently reveals that most customers upgrade when they feel their current device is old and slow. Those customers upgrading every 3-4 years, which is the norm, would see between 80-91% performance increases during their refresh cycles. Apple still has a large current installed base of iPhone 8, X, and Xs smartphones which I believe will lead the iPhone 13 cycle. Those customers are up for a huge upgrade in their total iPhone experience.

As I benchmarked the A15 Bionic in different ways and pondered how Apple spends its transistor budget with each A-series chip cycle, an interesting shift emerged for iPhone 13. Going back to how Apple spends their transistor budget on features, not necessarily performance, for the A15, Apple looks to have had the most GPU gains YoY since the A9. For the past five years, Apple has had an average of 19% GPU gains YoY but for the A15 Bionic, Apple has increased GPU performance by 52%.

This intentional increase in GPU performance over CPU performance speaks to the more graphically intense features Apple had in mind for iPhone 13 that is demonstrated in things like macro photography, macro video, and Cinematic Mode. Developers also now have a dramatically increased GPU at their disposal to create new app experiences around and can leverage new augmented reality techniques, visual computing and AI, and more.

Interestingly, there is no “macro mode” just open the camera and get as close to the subject as you can. iPhone takes care of the rest and knows you are taking a macro and adjusts the lens and focus. This was one of those features you try and can’t believe it actually works. It seemed no matter how close I got to the object, iPhone still focused and capture the image. Here are a few macro photos I took. 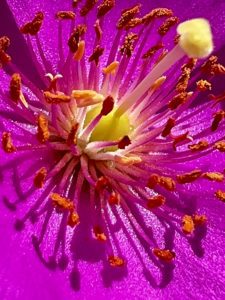 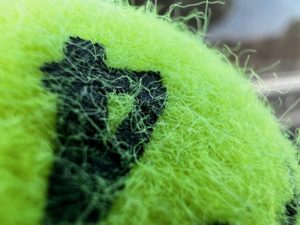 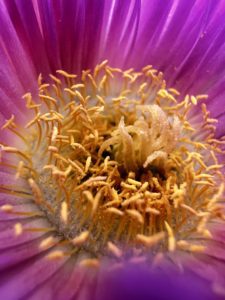 Taking macro photos with a smartphone was mindblowing, actually. It felt as if no matter how close I got to the object, the lens would still focus, and the main limitation was the fact that I literally could not get any closer to the object without hitting it with the iPhone lens itself.

Coming back to my point about iPhone every four years. While the dramatic increase in performance will be felt by consumers upgrading on these typical upgrade cycles, it is the features around the camera, battery, video, and other media where they will feel the most dramatic impact when they upgrade. This is the benefit to Apple thinking about the total experience of hardware, software, and silicon and intentionally creating each chip to be uniquely optimized for the newest set of features.